A History of Proven Results

Our track record speaks volumes, but so does our client base.

& Company once got a call from a client in Boston late on a Wednesday afternoon. They had scheduled a termination of their GM the next morning, an “emergency” based on a key customer visit the same day. They really needed support. That evening, we met the HR manager at the airport in Boston. Looking relieved, she said, “For a moment I had the terrifying thought that I would have to do this deed without .” The GM had been there for 18 years and was known to have a temper. The client trusted us to carefully bring calmness and sanity into a potentially explosive situation. No one knew how he’d react, but after more than 8,000 individual outplacements, we have developed a feel for how to best handle situations of this nature. At 7:30 the next morning we were with the HR leader and the CEO, and when we left, the affected employee was ready to move forward with a new career direction and the workplace remained calm.

When a French-owned minerals company in Marietta, Ohio had to let 300 people go when it closed one of its two factories, they turned to & Company. Marietta is a remote area with high unemployment, so senior management was worried about the reaction of their fellow employees. Our outplacement counseling and job search coaching put them at ease. We conducted multiple workshops and put people on the path to continuing their careers. The successful outplacement ensured that affected employees remained with the company during the shutdown period, which helped the company transition to its remaining factory, saving money and time.

A client who runs a private school told & Company, “You are the reason I can sleep at night.” They had struggled for more than 18 months to fill a vacancy for the head of the school. They finally called & Company after the board president had found herself needing to run the school in the interim. & Company found an ideal candidate in a matter of weeks. She has been in place and highly successful for years.

Finding qualified talent means nothing if you don’t have the right fit. A multinational manufacturer needed assistance finding a general manager for a facility in rural Arkansas. The facility had previously been owned by another manufacturing company. The multinational manufacturer searched for the right person for ten months. Experiencing no success finding candidates willing to relocate to such a rural and remote community, they turned to & Company. Using the Dise & Company search process, our team connected more than one hundred fifty contacts and qualified candidates. Early on we sent several preliminary candidates to the client to for review. This helped our team clarify, calibrate and refine their efforts to a laser sharp focus, identifying the right talent with the right fit.

Within two months, our search team presented three highly qualified candidates, all of whom our client agreed were qualified to perform the job and would fit with their corporate culture. One of the candidates had grown up in the area and wanted to return. The candidate they hired had started his career in that very facility when it was under different ownership. He loved the area and the people. When he visited the plant for his first interview people were actually hugging him in the middle of the plant! Although our client’s recruitment efforts had yielded no results after ten months, the Dise & Company search team found and secured qualified right talent, right fit candidates within sixty days.

& Company helped a family-owned business where the father was in the process of handing the reins to his son. The son had the title of president but not the tools for leading. Executive coaching gave him the tools he needed to actually be the president. The Dise & Company coach helped define the role by working closely with the client and ultimately helped the son become the face of the company, lead subordinates and articulate his vision for the company. Many young leaders feel pressure to know everything, yet great leaders are listeners who allow their people to explain things and trust their staff to execute.

In the end, they have been spot on with candidates for each position. 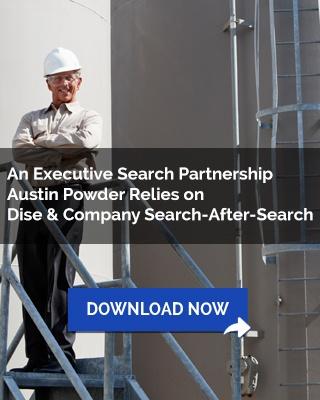 Your people make the difference. Our people get it.

A key to success is tackling talent needs head on. We help leaders take those decisive actions that will improve both their organizations and their people.

Companies have trusted Dise & Company to handle their most important resource - their executive talent - for more than 30 years.